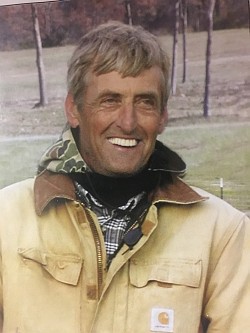 Steve purchased his first border collie, Wink, in 1989 from Kent Kuykendall to help him with his Suffolk show sheep. Cathy Hartley told me that when she met Steve he had 300 head of Suffolk sheep and no dog. He gave this dog back as he was too strong and got a dog named Greg that he kept until he was too old to work. Steve’s most well known Open level dogs were Jan (bred by Roy Johnson) and Hap (bred by Cathy Hartley). He won numerous open trials with these dogs. He also place in the top 10 Nursery Finals with Boss, a dog Steve trained and trailed for Bill Dedmon and Lucy, a dog that Steve raised and trained himself.

When it came to helping the beginner, Steve had a seemingly endless supply of energy and was extremely supportive and encouraging. He always found something nice to say about a dog. Besides giving lessons and clinics at his farm, Steve hosted many trials. His Novice Series were extremely popular and many of the top handlers got their start at Steve’s trials.

Steve was a founding member of the NC Border Collie Association which was started in 1990. He hosted many trials as fund raisers both for the club and for the National Finals. As one handler told me “Steve was never about the money.” The rookie award for the National Nursery Finals was named after Steve.
Steve could always be found at trials helping with set out, exhaust work and even repairing campers for folks. It didn’t matter if he was mad at someone, if they had a problem he was the first one to lend a hand. Even when Steve became too sick to be active in training and trailing, he continued to help others by “talking training” over the phone and via email.

Steve Clendenin was a friend and mentor to many. I feel privileged to have known him and think of him often, especially when working with those new in herding. His passing is a great loss to the herding community and to the Border Collie breed.