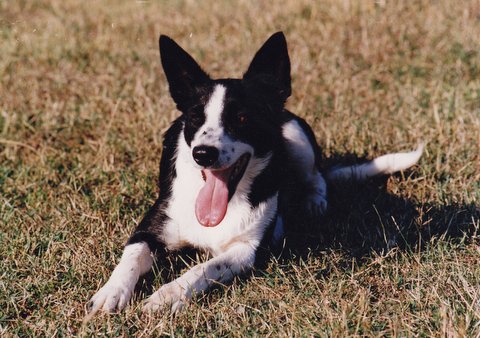 Hazel was Amanda’s first competitive trial dog teaching Amanda both how to train a dog and how to take on all comers on the trial field. Seeing Amanda run Hazel, Ralph Pulfer persuaded her to take the young Hazel to the National Nursery Finals in Sheridan, Wyoming. At the time Amanda was a rank beginner, having never heard of the National Finals. So it was in the hands of a novice, that Hazel began her career by becoming Reserve National Nursery Champion. Hazel and Amanda went from success to success all over the United States and Canada until Hazel retired at ten, having helped to create one of the most formidable handlers in North America and a dynasty of dogs that complimented not just Amanda’s style of handling but that of many others as well.

Hazel had several litters of pups. Two of those pups stayed with Amanda for the long haul, Grace and Eucher. Both of those girls ran well until old age caught them. Each claimed a Canadian Championship and left good replacements as well. Grace was the mother of Bart (sired by Stuart Davidson’s Craig) who won the 2005 U.S. National Finals at Sturgis, South Dakota. His littermate, Elizabeth Baker’s Rye was also very successful on the trial circuit.

It was, however, through another Grace offspring, Ethel, that most of the dogs thought of as Milliken dogs sprang. Ethel (Grace x Stuart Davidson’s Craig) was two times Canadian Champion and a regular finalist at the US National Finals as well as the winner of many, many other trials including Meeker. Amanda’s two current champions, Roz and Monty are both Ethel (Stuart Davidson’s Star) offspring. Ethel was also the mother of Roy Taber’s Craig winner of this year’s Blue Grass and the great grandmother of Dorey, the current U.S. National Nursery Champion. The roster of competitive dogs off Hazel is very lengthy and includes Sue Schoen’s Esther (3rd National Nursery Finals), Mich Ferraro’s Clive (winner Meeker), Leslie Gamble’s Bob, Libby Neider’s Lyn and Dave Murray’s Mo, Canadian Nursery Champion.

Hazel embodied the best in what is sought by breeders in the working border collie. She was a very successful trial dog, a wonderful farm dog and a great athlete who could pass all of those qualities on to her offspring. She was also the key dog in the pedigree of a line of dogs that have competed successfully for many different handlers at the local and national level in the United States and Canada for over twenty years. Hazel was a great character and an easily trained dog and has passed that solid temperament and trainability on to her children, grandchildren and great grandchildren. She was quite simply a great dog and more than worthy of inclusion in anyone’s hall of fame.