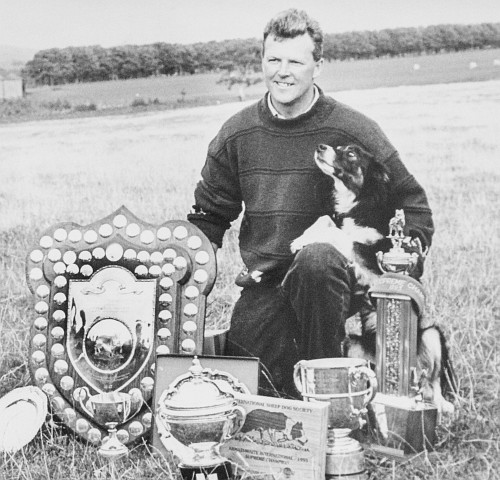 I got Nan in to train for the winter when she was just over a year old. She already had a little training on her and Kenny Brehmer, the main influence on my sheepdog career and her owner, wanted to have her ‘nursery ready’ when he got her back. She was a determined little thing who always thought that cutting corners as fast as she could was the way to go and stopping was the worst idea she’d ever heard! When I had her trained to do a nursery course, Kenny came to see her work. She was quite nice and quite a handful, she also had some shortcomings and gave no indication that she was special at that time. Kenny liked my open dog Glen who was a J A McLeod’s Taff son bred by Pat Mcgettigan, so we traded. He bought Glen and Nan stayed with me.

Throughout the next 6 months I offered her for sale to a few people but no one bought her. I ran her at a couple of nurseries without success and then at lambing time, she tried to jump a fence and caught her leg, tearing her cruciate. Ian Cameron, our local vet did the operation and did a first rate job as after her rehab, she never took a lame step due to that injury.

That winter after introducing her to light work successfully, I took her north of Inverness to a combined Nursery/open trial. I was 3rd in open, which got me qualified for the following years National. After her layoff it seemed that she had relaxed considerably, stopped cutting corners and was settling her sheep. That fall we made the team, got through to the final and won the Supreme Championship at Armathwaite.

Nan was a grand dog on the hill, with plenty of stamina. After her injury she developed scope and became a good bit easier to run, well, mostly!! About once a year she’d come out at a trial and run strong to the point I’d have real problems putting up a finished run. I always thought she was just reminding me of what she could’ve been like, not to take her for granted and how lucky I was to have her!

She always rose to the occasion, especially when the chips were down or the lights were shining brightest. Including putting down a 108 out of 110 in the television program One Man and his Dog on BBC, a record in the shows history that still stands today. She was a great listener and very good in all aspect’s of trialling and work, rather than being great at any one thing, it was the sum of her parts that made her such a special one.

As a dog, she was affectionate, friendly, gracious, generous of spirit and had the heart of a lion. She is the best partner I’ve ever had and I feel honored that she so trusted in me, to give me her all. Her ashes are spread beside her grandfather Mirk on Lendrickhill, the hill she worked as a youngster, looking up at the braeface where we practiced before her winning run in the 1993 Supreme International Championship.