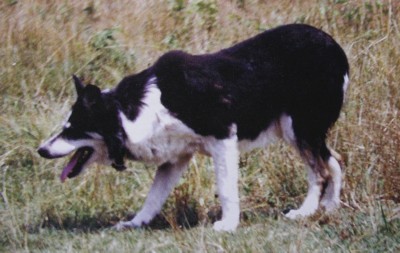 Peg was brought over from Wales by Colin Gordon for Bob Roe of Arkansas. Bob used her on cattle and sheep as he also had a Dairy. Peg was later bought by Cathy Connor and finally by Cindy Von Dette. Cindy says that Peg’s good qualities include the ability to gather a big field with lots of stock with no help, and an ability to figure out tough situations and solve them on her own. Peg is also quite willing to bite if the stock don’t move and will work sheep or cattle.

Peg’s heritage includes a host of Welsh trial champions, the nearest being A. Owen’s Rock ISDS 162204 and W. Jones’ Mac ISDS 116944. Peg, however, was not a trialed. Her legacy is in what she produced, numerous top trial dogs and reliable farm and ranch dogs. One can only wonder what she might have done in competition. Very likely it would have been significant.